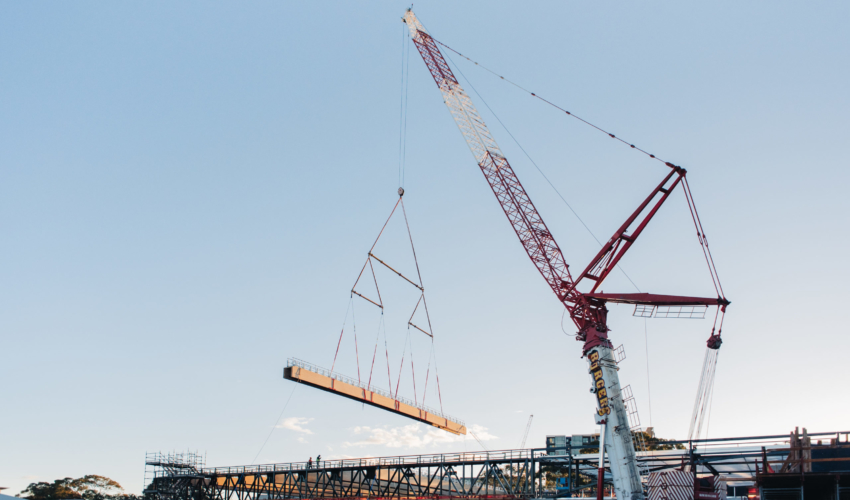 Steel and concrete predominate the building market for structural materials, while engineered timber is gaining momentum for its significant embodied carbon savings and sequestration ability.

The global steel sector has a massive carbon footprint, contributing upwards of 10% of global carbon dioxide emissions.
Manufacturing virgin steel from iron ore is energy intensive. Basic oxygen furnaces (BOFs), the norm in much of the developing world, require coke—a purified version of coal—to extract the iron from the ore and alloy it with carbon. The result, pig iron, is then refined into mild steel, which incorporates about 25% recycled iron and steel scrap.

As the world’s most ubiquitous construction material, it contributes 6% to 11% of global carbon dioxide emissions. Most of those emissions come from the production of its binder, portland cement, which comprises about 10% of the concrete mix by weight, on average. Producing aggregate—sand and crushed rock, which may constitute 70% to 80% of the mix, on average—also requires energy, but much less so. Sand mining can damage river and coastal ecosystems.

Innovations in mass timber, notably the production of engineered products such as Glulam, CLT and LVL, have brought the reality of carbon-neutral construction attainable on a large scale. When trees are harvested and replaced, mass timber can sequester more carbon during their growth than what’s emitted to manufacture, transport, and construction stages. Increased demand for sustainably sourced timber is helping with reforestation.

CLT panels can replace steel decking and concrete floor slabs in commercial structures, and glulam columns can take the load of mid-rise and high-rise structures from their steel and concrete counterparts. These timber products can also be easily designed to be fire-resistant and fast to assemble.

Provided engineered timber remains in service and is prevented from decomposing, it infinitely sequesters carbon.

Durability of engineered timber is ensured given that it is protected from water, insect, or fungal infiltration through the use of treatment where required and with good design and detailing of the building envelope. To be reusable, timber members should be joined by removable fasteners.